Yesterday, Utah Attorney General Sean D. Reyes affirmed his commitment to those who are victims of violence based on an individual’s race, religion, gender identity, sexual orientation or identity as SB103 Victim Targeting Penalty Enhancements officially became law in a Capitol Rotunda signing ceremony today. Also known as the hate crime bill, this law is an important step toward protecting all Utahns and their freedom.

SB103 establishes enhanced penalties for those who commit violent crimes that target individuals and recognizes the unique impact these crimes have on every community in our state.

Last month, the Utah Senate and the Utah House of Representatives passed SB103 with legislative approval over to Governor Gary R. Herbert, who led yesterday’s signing ceremony. Also present were Senator Daniel Thatcher and Representative Lee Perry, Lieutenant Governor Spencer Cox, Senate President Stuart Adams, House Speaker Brad Wilson, a large bipartisan group of Senators and Representatives and many other supporters whose hard work on hate crimes legislation over the years have culminated in this day. 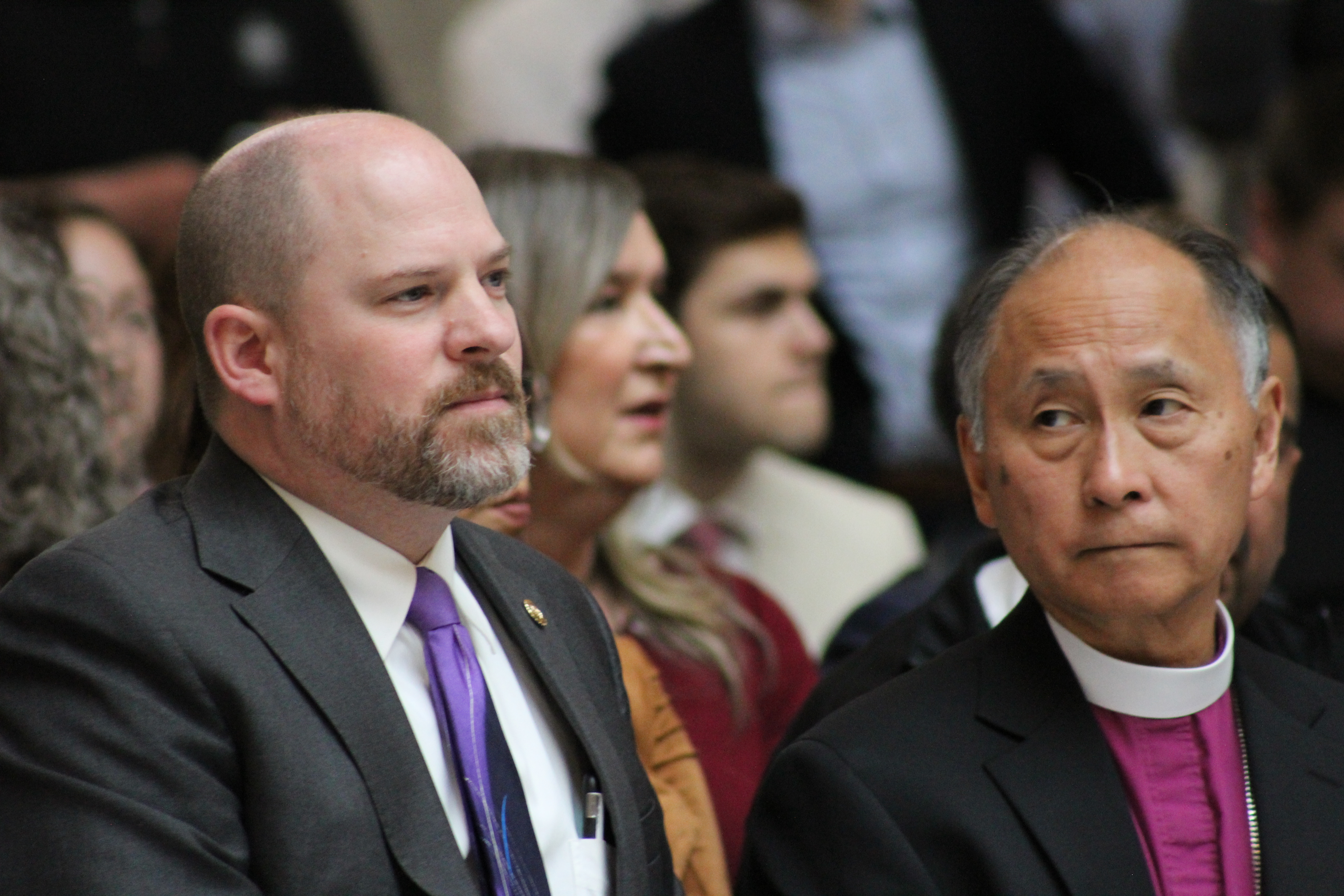 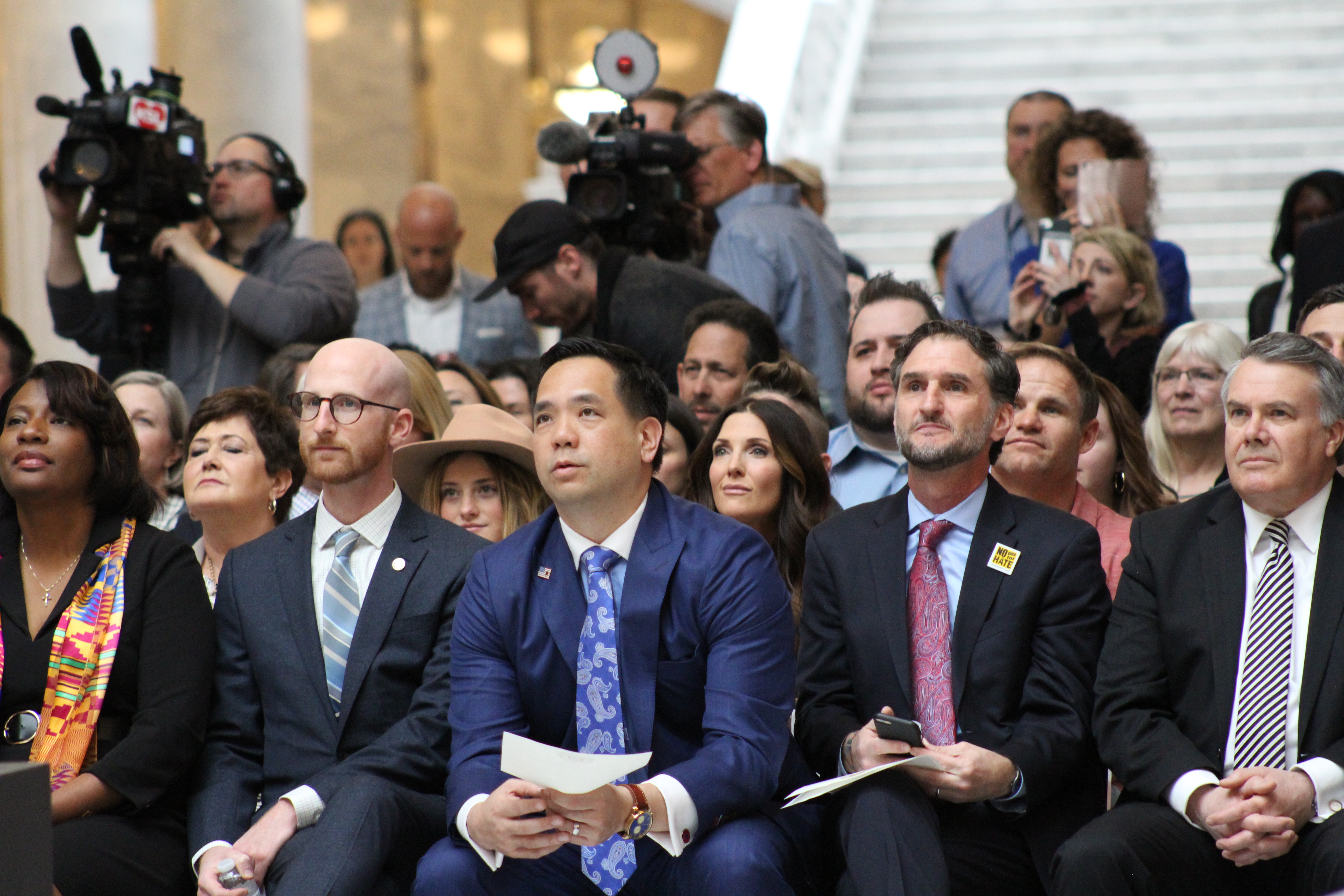 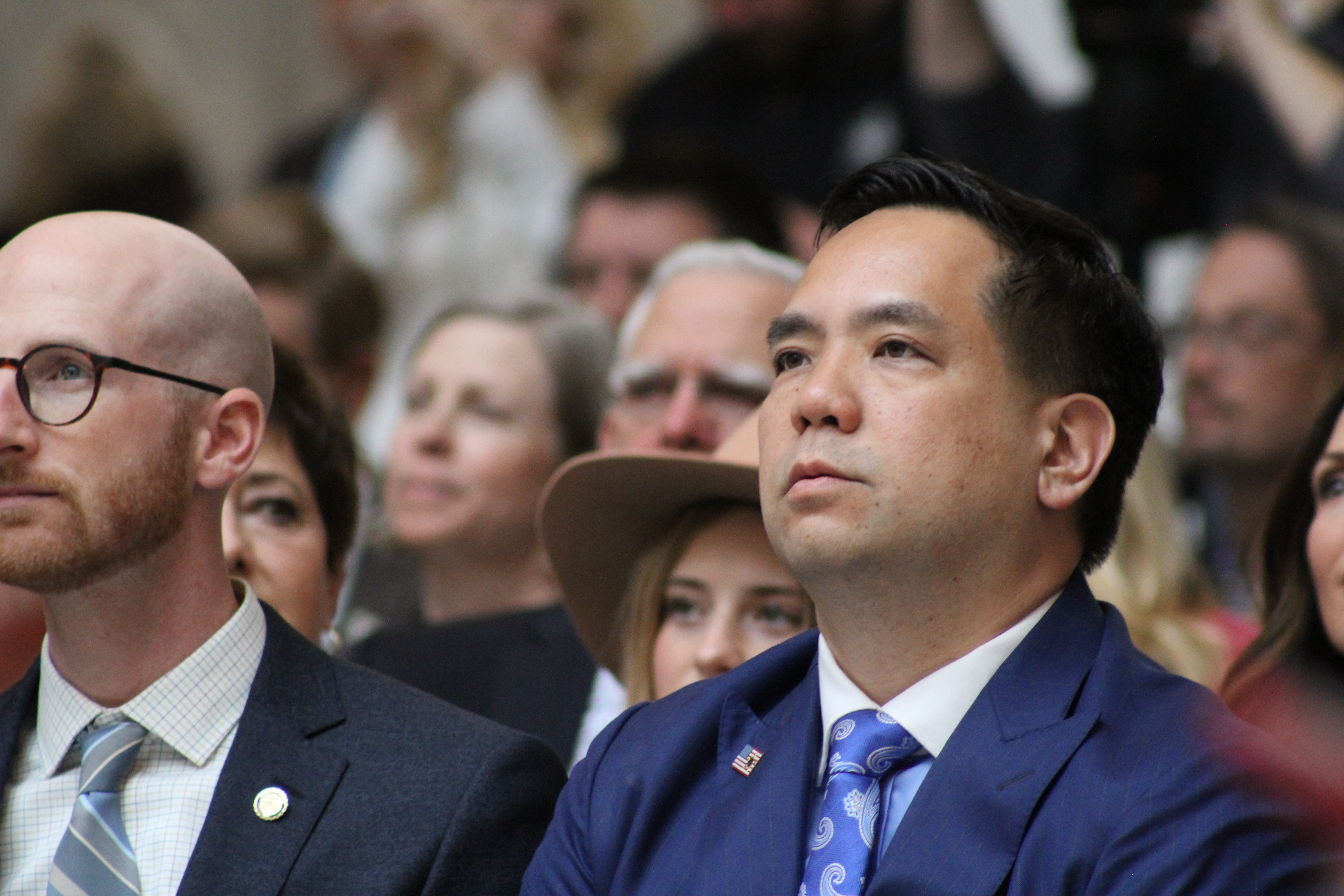 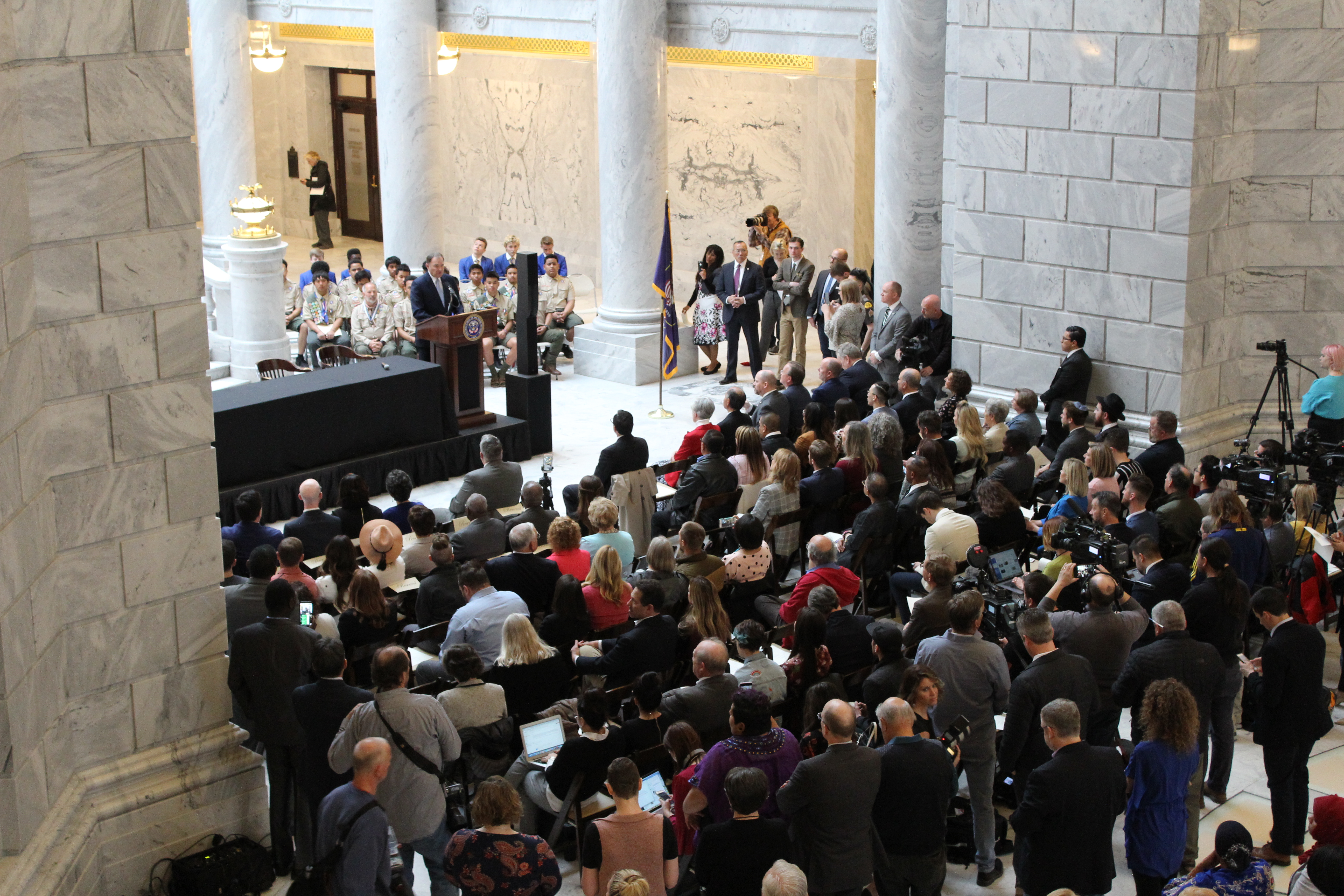 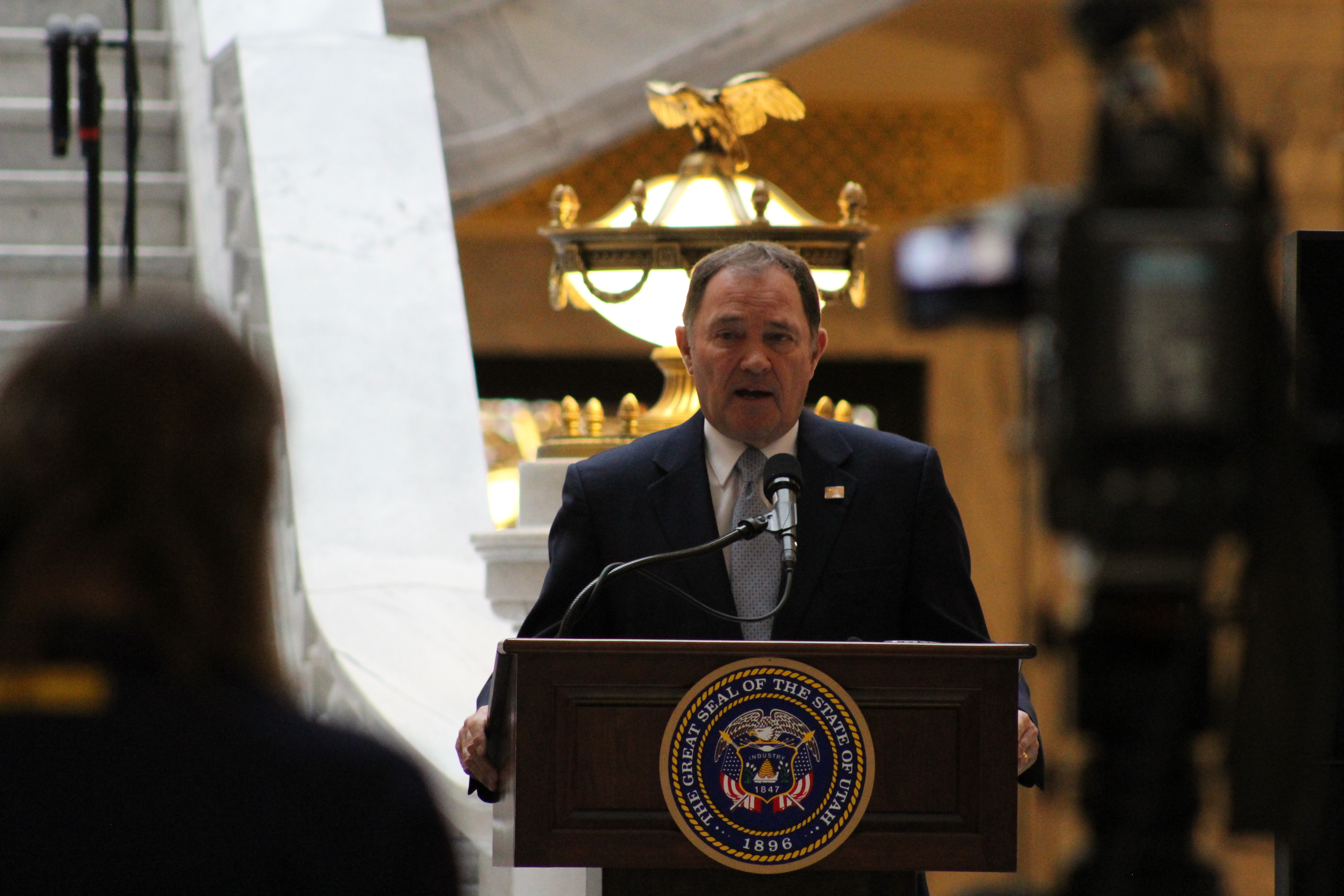 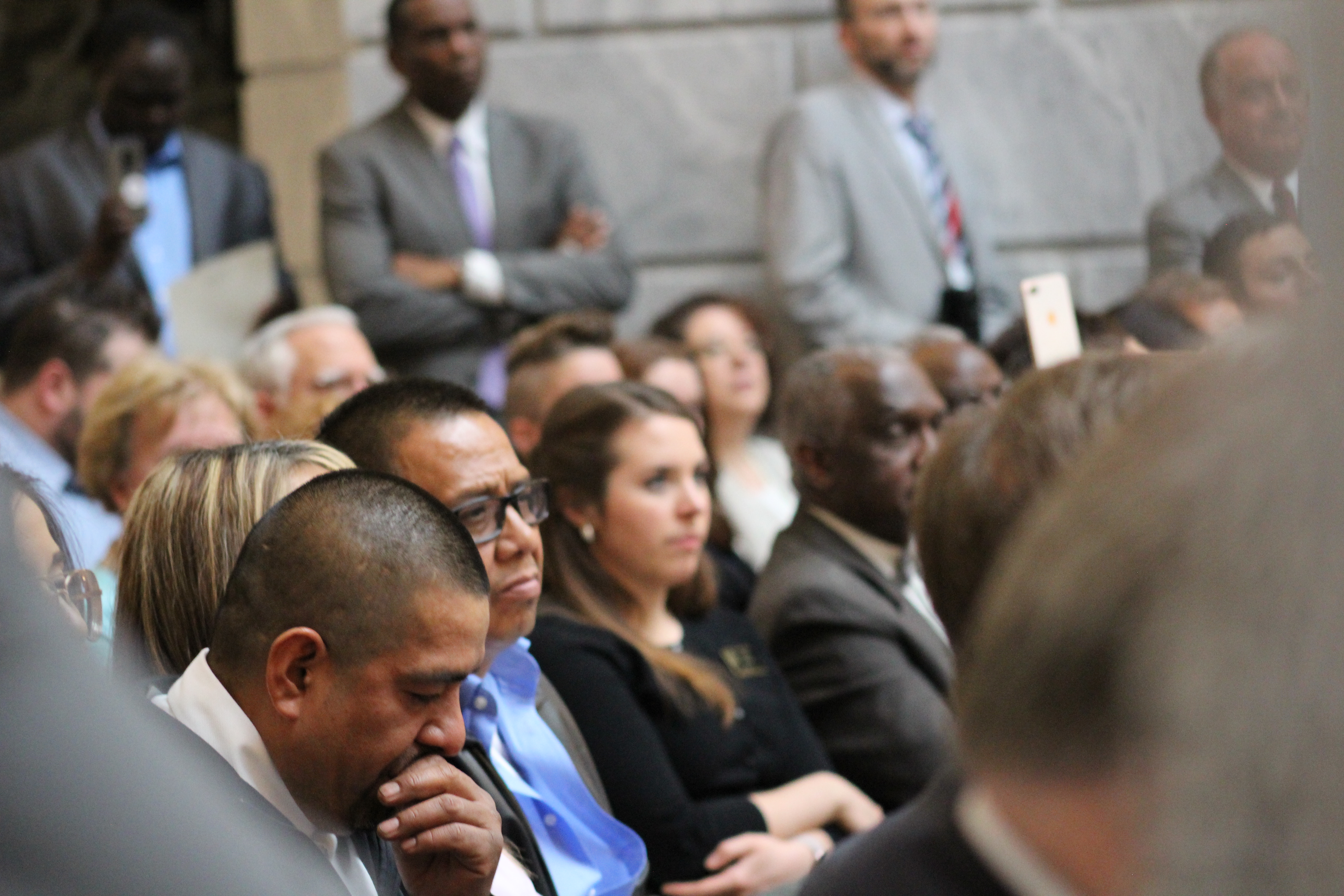 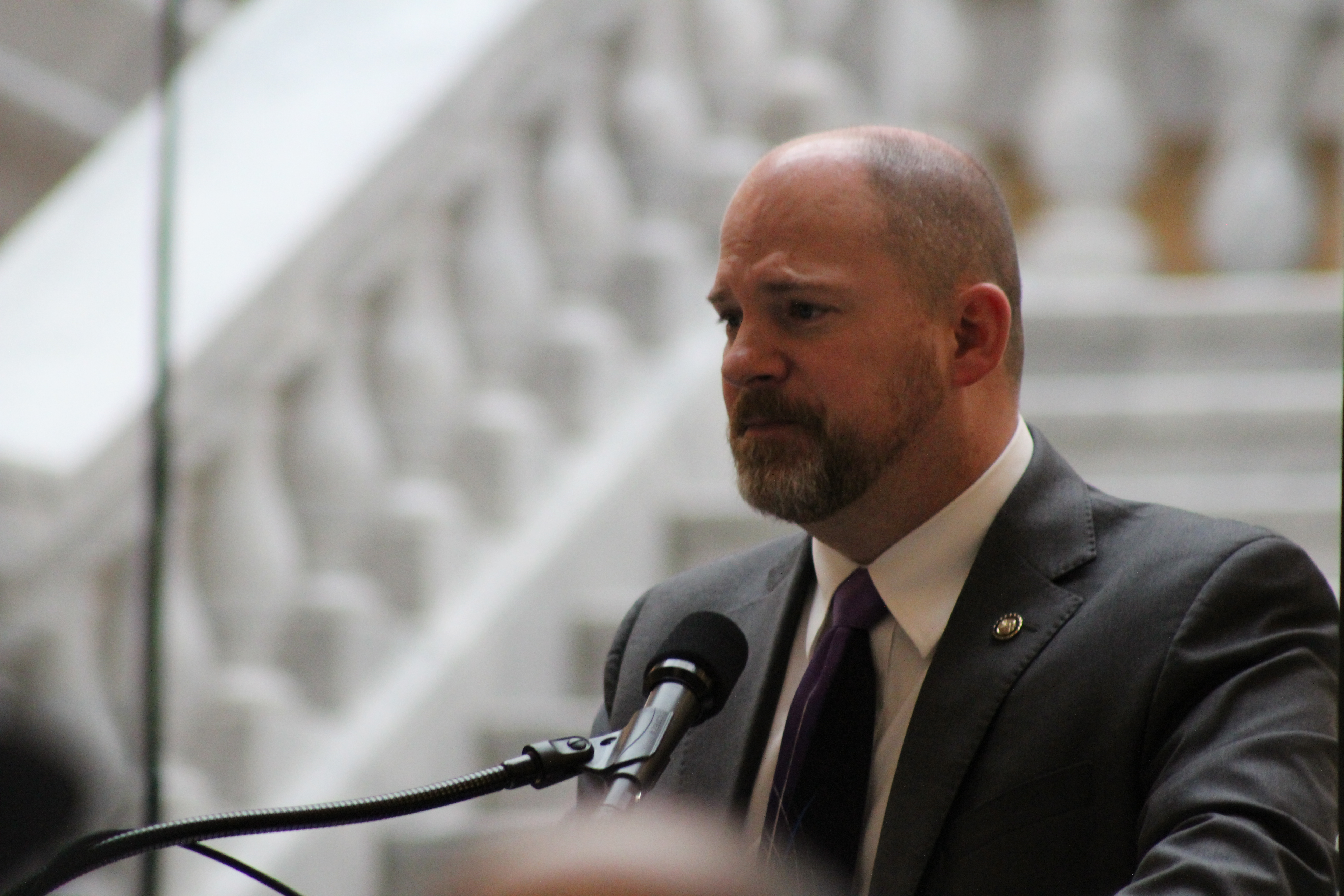 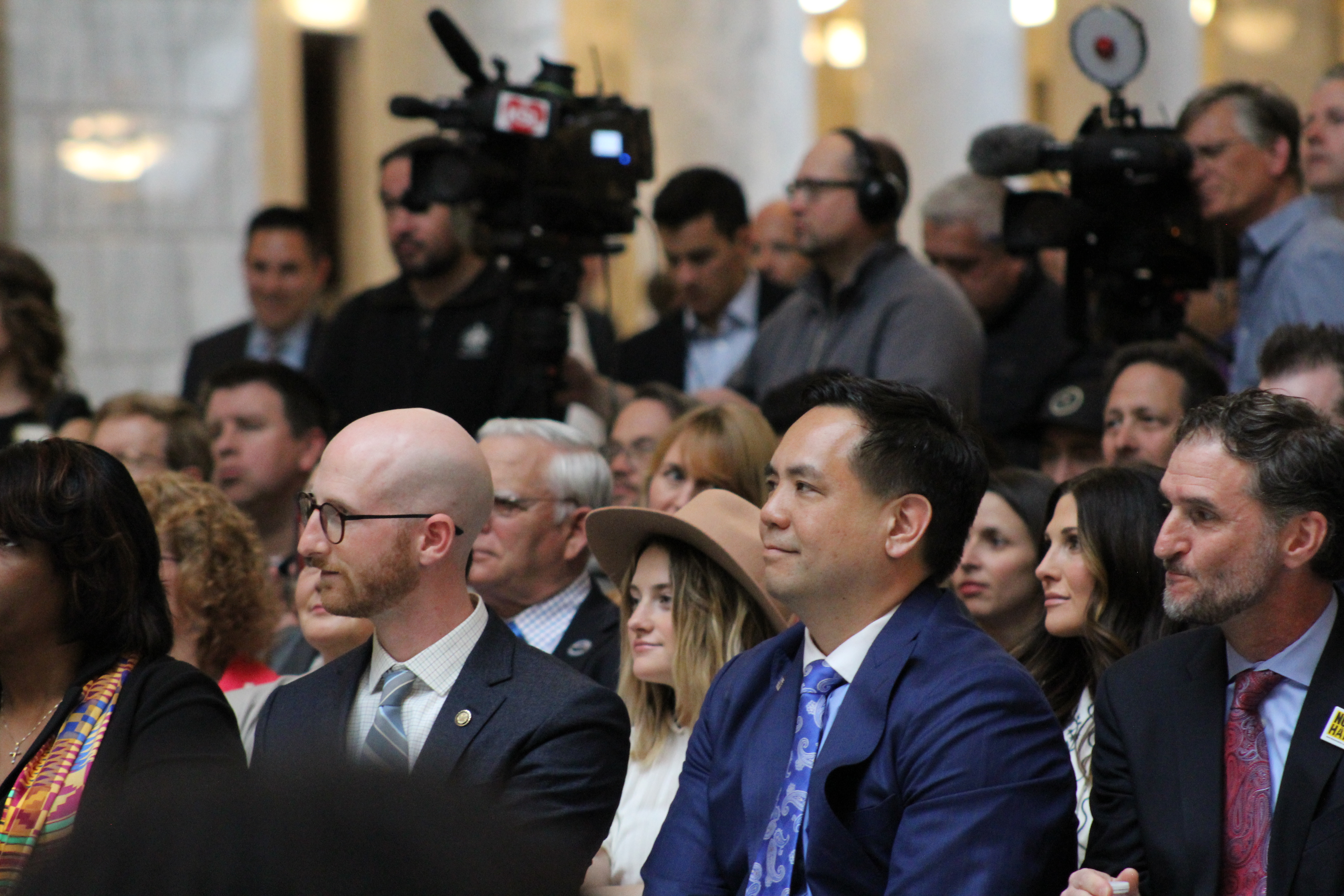 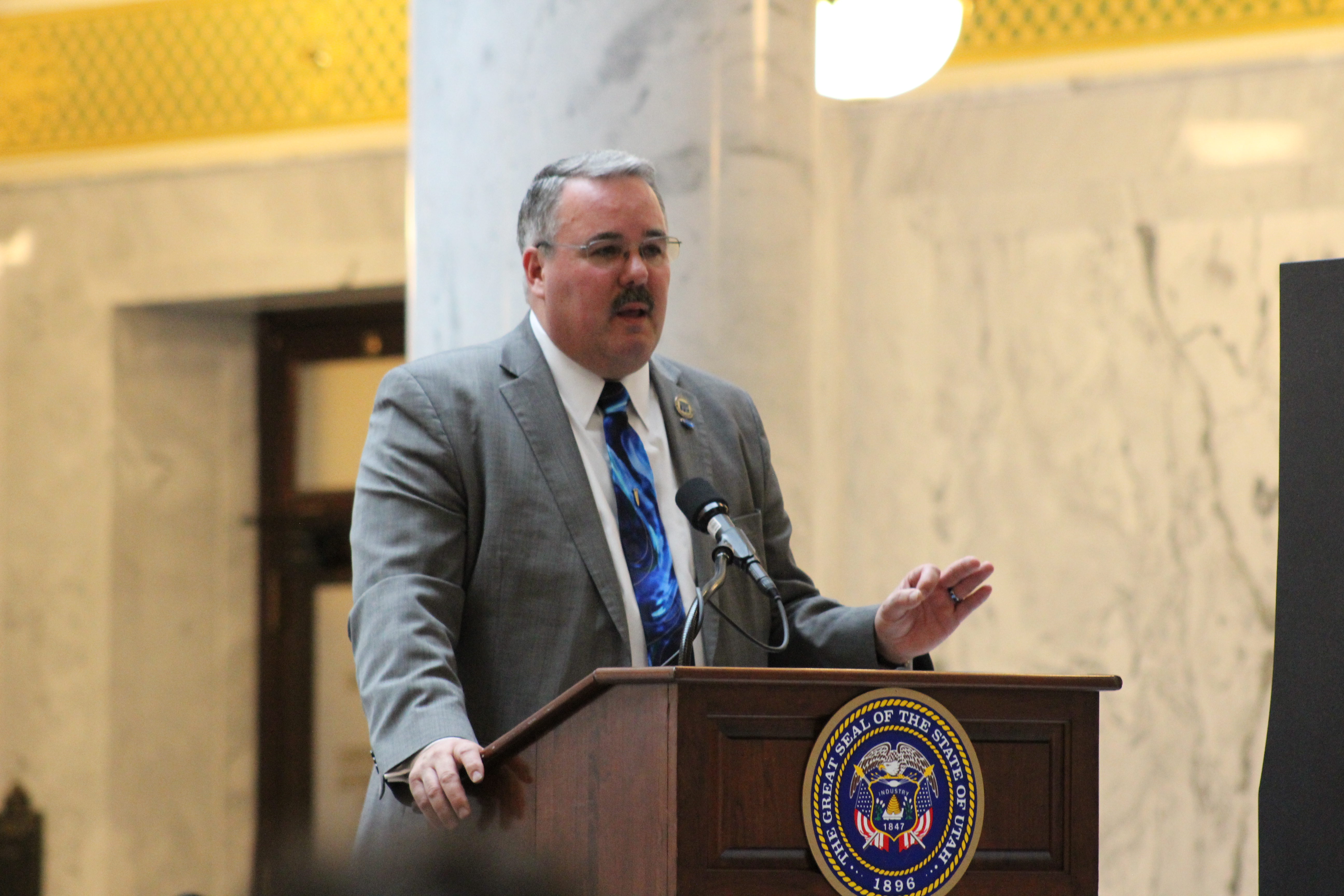 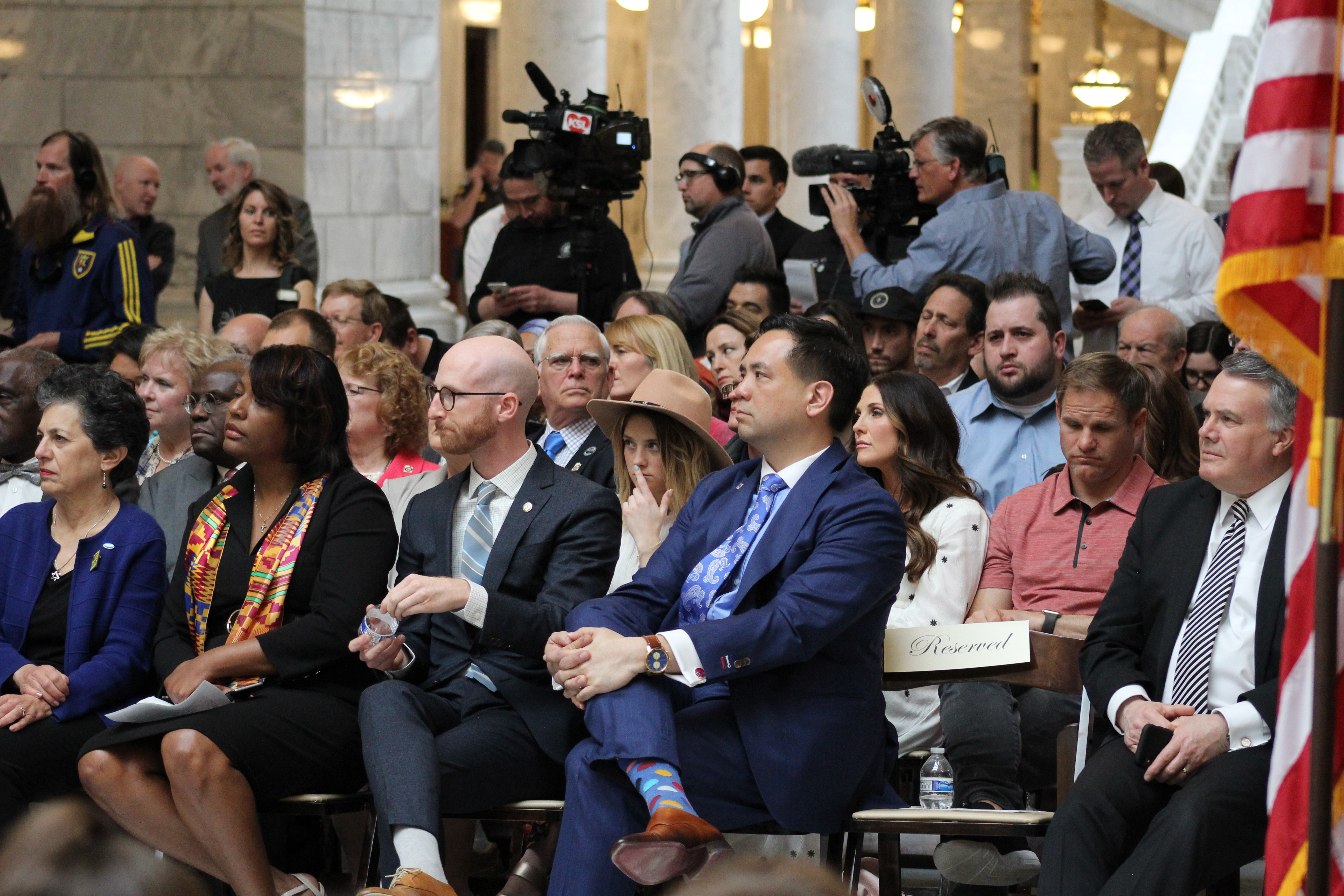 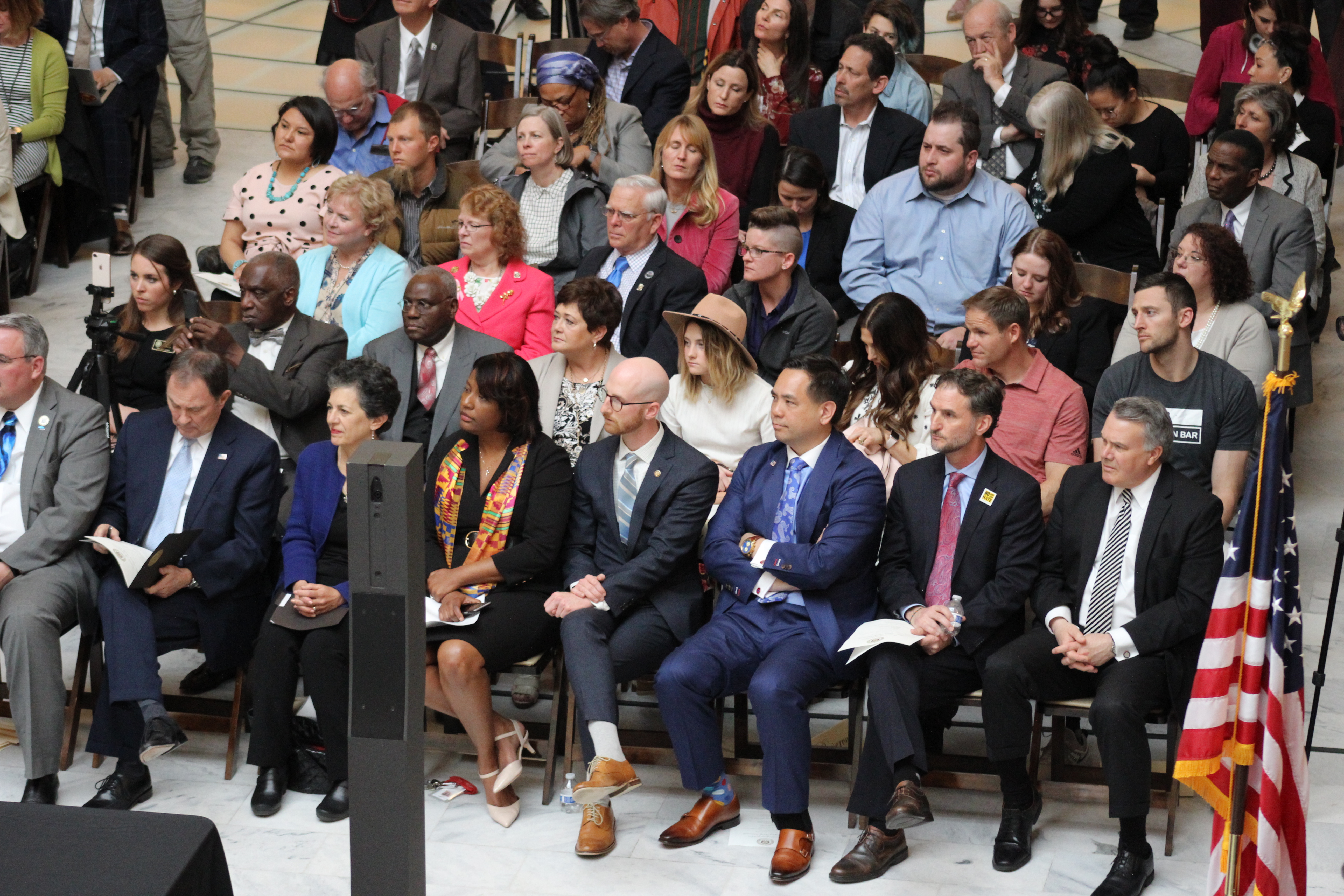 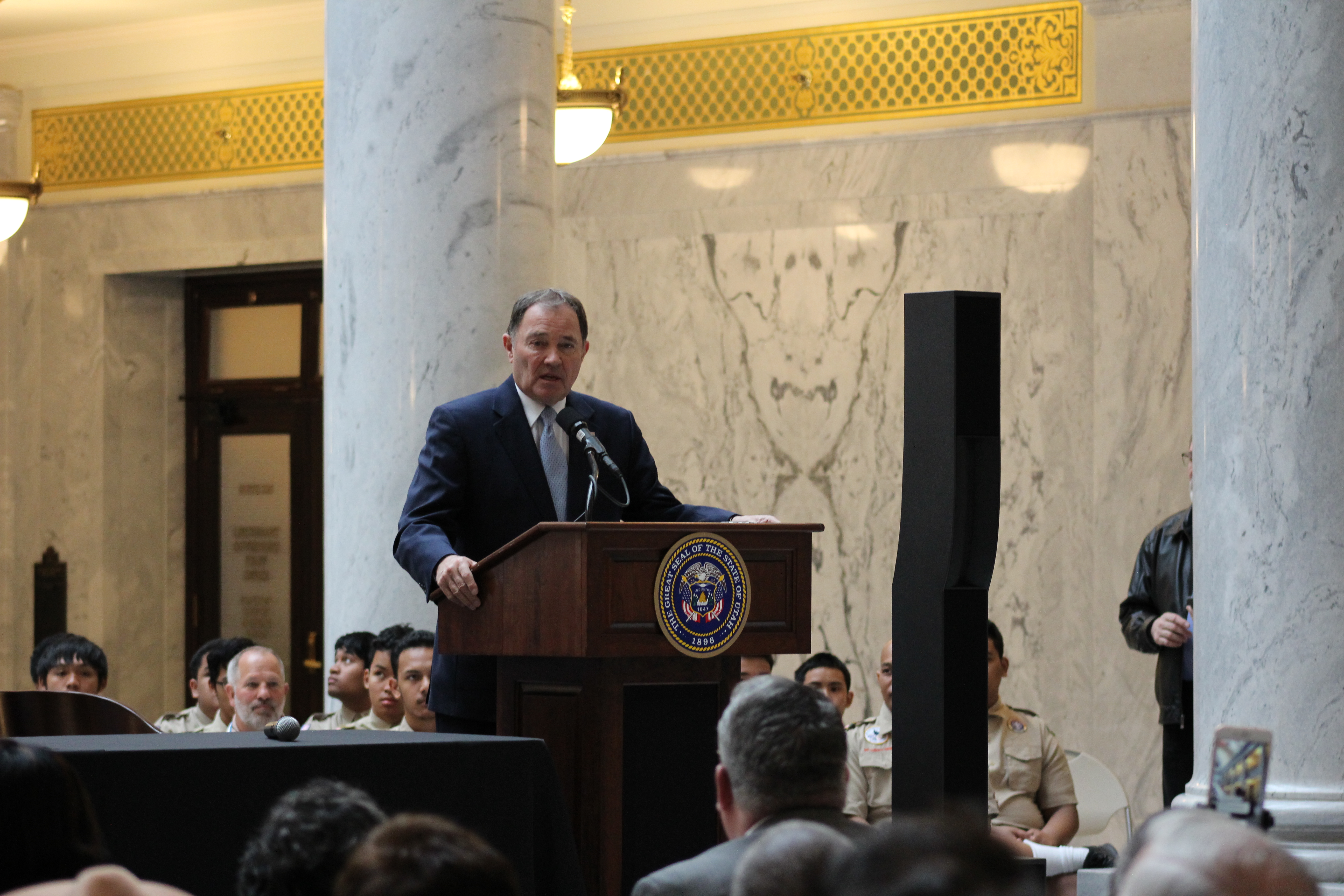 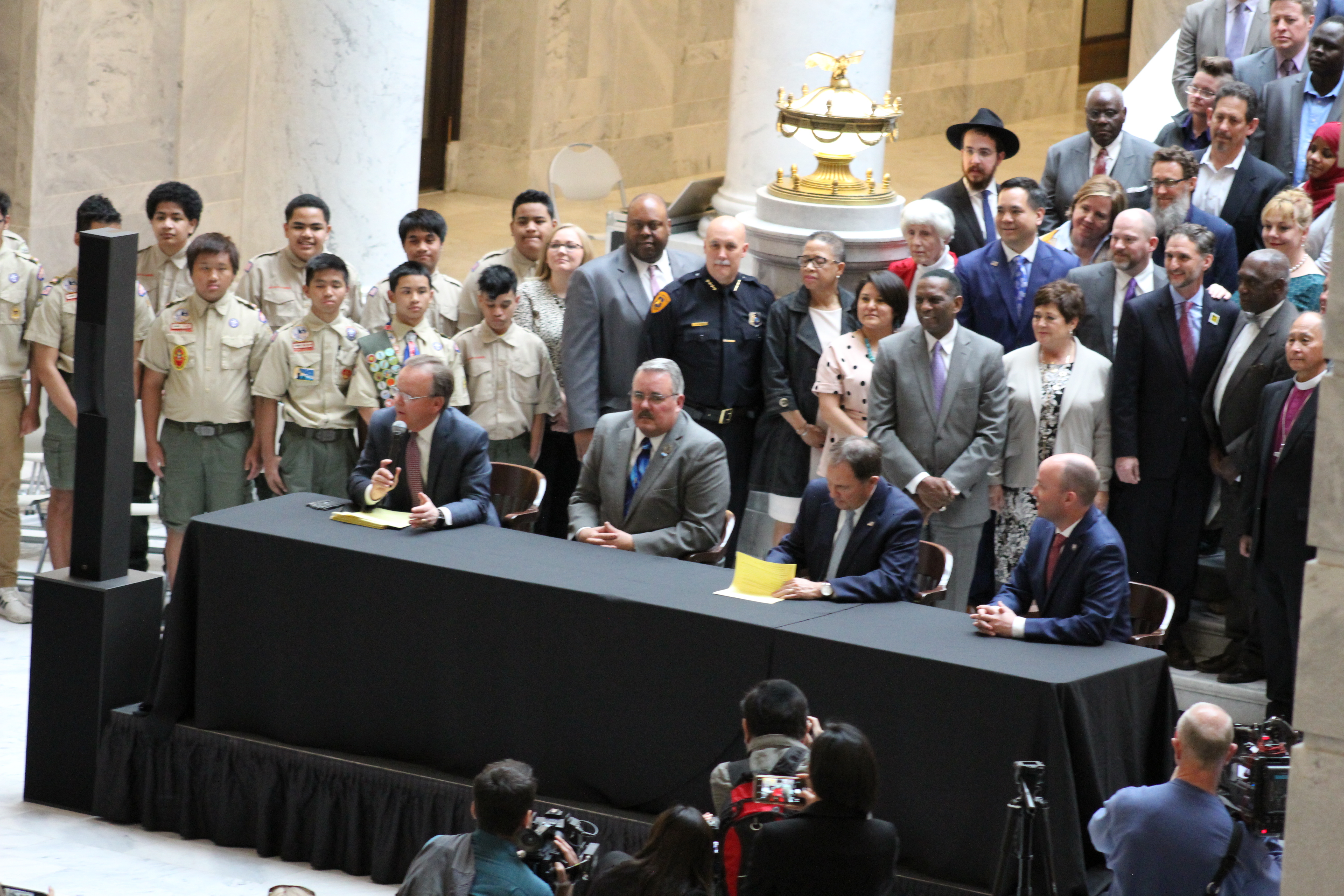 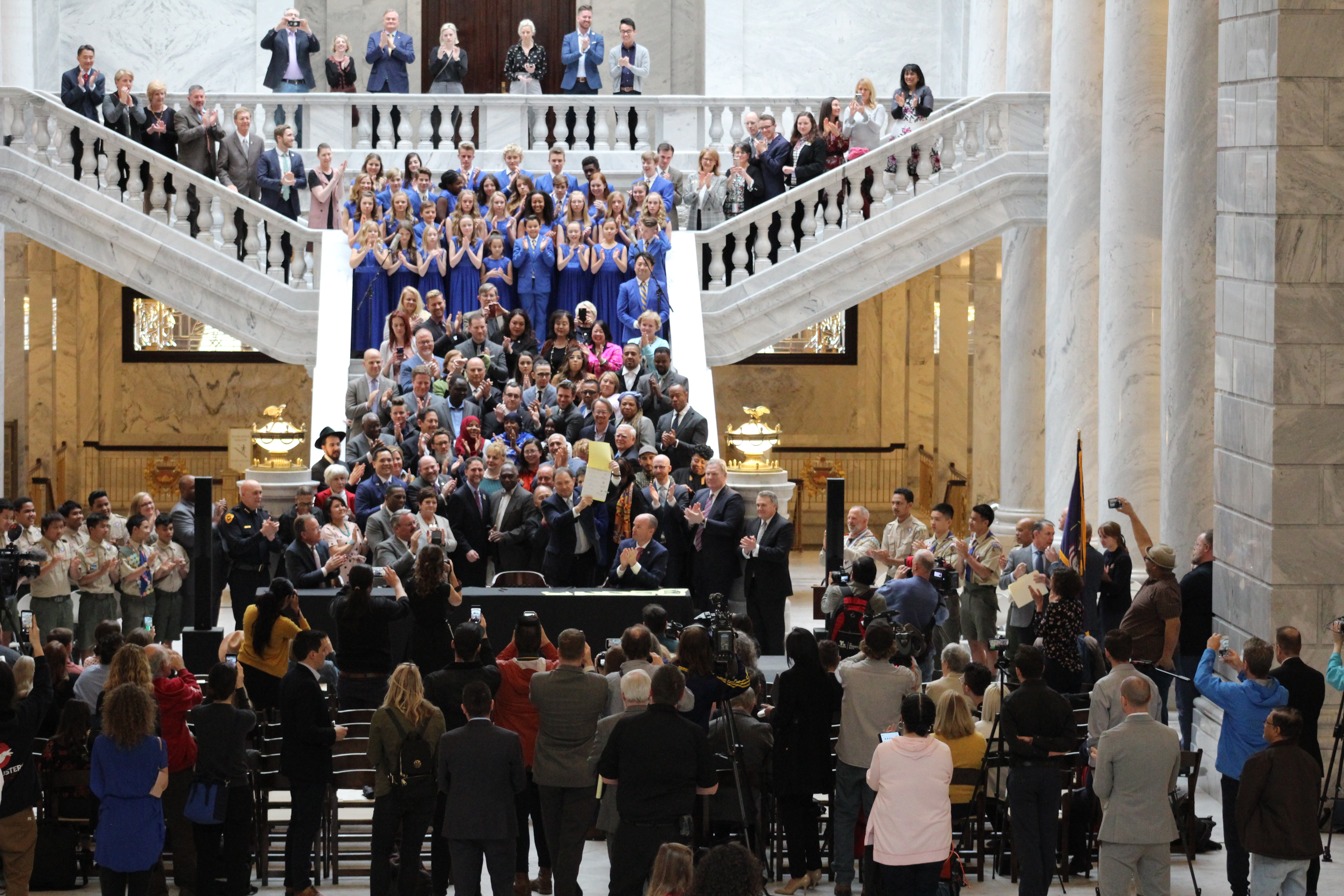 Catch the media coverage below:

SB103 expresses the importance of establishing an enhanced punishment for those that commit crimes based on an individual’s race, religion, gender identity, sexual orientation, or identity and recognizes the unique impact these heinous crimes have on our communities. This new statute does not favor some over others or seek to punish speech or thought. All Utahns deserve protection from crimes motivated by hate and the freedom to express their individuality.

Congratulations to Senator Thatcher and Representative Perry, Leadership in the Senate and House, and all others who made this possible. Many of us have worked for years to get a bill this passed. Legislators and supporters who passed prior hate enhancements under Utah law also deserve credit and helped build toward this day.

This session, the Utah State Legislature can take an important step toward protecting our freedom. SB103 (Victim Targeting Penalty Enhancements sponsored by Sen. Daniel Thatcher) recognizes the unique impact of a crime targeting individuals or institutions on the basis of how they pray, the color of their skin or their sexual orientation or identity, among other characteristics. The heinous nature of such crimes and the greater impact on the community is absolutely deserving of an enhanced punishment.

The proposed hate crime statute does not favor some over others or seek to punish speech or thought. The A General’s office and Anti-Defamation League, the agency that innovated hate crime legislation, stand united to set the record straight about this bill and hate crimes laws in general.

Fact: Hate crime laws do not police or punish speech or thought.

Speech is protected under the constitution and cannot and should not be criminalized. A hate crime law like SB103 does not punish speech or thought. Instead, it may provide a penalty enhancement for a crime where it is proven to be motivated by prejudice.

Fact: Hate and bias is often the primary, if not sole, motive for a hate crime.

The perpetrator’s animus toward race, religion, national origin, gender, gender identity, sexual orientation or disability — actual or perceived — is the reason for the crime. In the vast majority of cases, absent the victim’s personal characteristic, no crime would occur.

The purpose of a hate crime is to send a message to the victim and the victim’s community. Men beaten outside of a gay bar are rarely robbed. Vandals do not typically spray-paint messages like gang tags on the side of synagogues; instead the vandalism frequently consists of threats or a swastika. Bigots do not burn random shapes on the front lawns of African-American families who moved into a previously all-white neighborhood. The message of such shapes would mean nothing. But the charred remains of a burned cross send a clear message. The message is one of intolerance, exclusion and hate.

The alleged perpetrator of the Tree of Life Synagogue shooting in Pittsburgh in October 2018 aimed to deliver a message of hate to all Jews. He did not know his victims. He harbored animus toward the community and his attack impacted Jews nationally and globally. Members of the Jewish community around the world envisioned themselves in the pews in Pittsburgh. In the following weeks, synagogues across the country and around the world increased security to reassure members of their safety. Allies attended services at congregations to demonstrate solidarity.

This is not a new phenomenon. More than one hundred years ago, in the aftermath of the only documented lynching of a Jew in American history, half of Atlanta’s Jewish community, the largest in the American South, fled the state. Many of those who remained hid aspects of their Jewish observance. The American Psychological Association confirms that hate crimes cause targeted communities to feel unwelcome and unsafe. Hate crime statutes send a countervailing message that society will not accept the intimidation and terrorization of segments of our community.

Fact: Hate crimes are more violent than other crimes.

A Northeastern University study found that hate crimes are more likely to involve physical injury and, compared to other assaultive crimes, are three times more likely to lead to hospitalization. The severity of and motivation for a crime are legitimate sentencing considerations.

Over the past 40 years, federal and state hate crime laws have been upheld against a variety of challenges under the 14th Amendment’s equal protection and due process clauses, and under the First Amendment. In 1993, in Wisconsin v. Mitchell the Supreme Court unanimously upheld the constitutionality of hate crimes statutes in an opinion written by Chief Justice William Rehnquist. The Supreme Court found the statute was intended to address conduct that the state legislature thought would “inflict greater individual and societal harm.” It also held that the statute was consistent with established anti-discrimination laws, narrowly tailored, and that enhanced penalties for racially motived crimes do not violate First Amendment rights.

In the case of Wisconsin v. Mitchell, the court upheld the conviction and enhanced sentence when a racist assault by a group of young black men targeted a white boy. Protected classes enumerated in a hate crime statute shield individuals or groups on all sides selected on the basis of race (e.g. Caucasian or Latino), gender (e.g. male or female), sexual orientation (e.g. straight or gay) or religion (e.g. Christian or Muslim), and so on.

On a personal level, we have both felt the terror of being threatened or assaulted for racial, religious or other reasons motivated by hate. These experiences have left us and our families fearful of leaving our homes and caused sleepless nights worrying about when the hate will strike next. While crimes motivated by hate may not meet the legal definition of terrorism, that is exactly what they represent.

Thankfully, these crimes do not occur every day in Utah. But when they do happen, they tear at the very fabric of our society. All Utahns deserve robust protection from crimes inspired by hate.

This op-ed was originally published in the Deseret News on March 3, 2019.