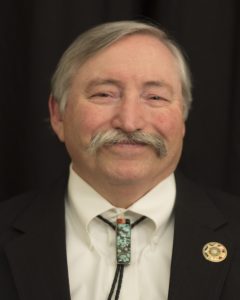 “We thank, and congratulate, Randy Hunter for his decades of service for Utah in the Attorney General’s Office,” said Sean Reyes, Utah Attorney General. “Not only will we miss Randy’s distinctive style in our office, but we’ll also miss his love for Utah, the West, and his appreciation and knowledge of music and Native American culture, as well as his diligent representation of Utah during his years in our office. We wish him all the best as he moves into this next stage of life.”

Randy graduated from the University of Wyoming Law School in 1976.  Randy started his legal career with the National Park Service where he was a law enforcement Ranger for Grand Teton National Park and later practiced  natural resources and banking law in Wyoming. As an officer of the Dept of Interior, he was involved in law enforcement activities on several reservations and National Parks during the violent days of the “American Indian Movement” or “AIM” .

He later took employment with the State as Liability and Litigation Manager for the Utah Department of Transportation (UDOT) and later became Major Projects and Environmental Counsel for UDOT. He has now been with the State for 26 years, currently working in the Highways and Utilities Division. Randy handles environmental, contract, and both inverse and direct condemnation litigation at both trial and appellate levels. He has been a frequent speaker on risk management and environmental issues affecting transportation agencies.  He has been a member of the environmental law committee of the legal services group of the Transportation Research Board of the National Academy of Science and Engineering.

When not in the office he can be found at the shooting range where he likes to complete in “Cowboy Action” shooting where all firearms used are of pre-1896 design (which is also how his wife describes him) or at Abravenel Hall where he performed until recently with the Utah Symphony Chorus.  He loves Classical,  Opera, and Cowboy music.

Randy grew up near the Wind River Indian Reservation. As a boy, he loved pow wow dancing and performed with an Arapaho dance group.  He was the only non-Indian in the group.   The group also performed historic religious ceremonies and dances at several Native sacred sites in Wyoming and South Dakota.  He was given the Native name of Randy Snow Eagle. He volunteers with the Adopt-a-Native Elder program delivering food and medicine to remote locations on the Navajo Reservation.