The Utah Attorney General’s Office was proud to hear that our friend and colleague Assistant Attorney General Scott Davis has been appointed as a judge on the Fourth District Juvenile Court by Governor Herbert. 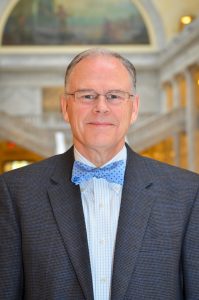 In a press release announcing the appointment, the governor said, “I look forward to having Scott Davis’ expertise on the Fourth District Juvenile Court. His enduring dedication to juvenile and child welfare law make him an excellent candidate, and I fully trust he will serve our state well.”

Davis received his Juris Doctorate from the University of Puget Sound.  During his time at the AG’s Office, Davis represented the Division of Child and Family Services. Before that, he served as an AAG with the Securities Division of the Department of Correction. He was also a civil and criminal defense lawyer for a number of firms and handled juvenile delinquency and child welfare cases for the State of Alaska’s District Attorney’s Office.

Scott is as devoted to this office and his work as he is to his wife, Becky, his children and his grandchildren.  Scott has earned the love and respect of his co-workers and the client, and often takes time out of his busy schedule to listen, counsel and mentor whoever knocks on his door. He is fair, honest and humble. Scott’s passion for work in child protection has and will continue to serve the citizens of Utah and the Fourth District Court as Judge D. Scott Davis.

Juvenile and child welfare law has been Davis’ passion and focus during his 35-year career, and he is looking forward to a new season.

Again, from the governor’s press release:

“I am humbled and grateful for the trust and confidence Governor Gary Herbert is extending in appointing me to serve on the Fourth District Court,” Davis said. “I am committed to compassionately, fairly, and justly applying the law in all cases in which I am involved. I pledge my best efforts in serving and helping children and families.”

We wish you all the best on your next endeavor, Scott. Good luck!

We also want to extend congratulations to Debra Jensen on her nomination to the bench in the Second District Juvenile Court. As a former Assistant Attorney General in our Human Services Division earlier in her career, its a privilege to have been a part of her journey and success.